Parallel is SO MUCH easier if you ditch Arduino and just write some AVR code.

So, you reversed engineered yourself through the Datasheet in English? Ffs.. and this guy has supposedly studied Computer Science. Stop with the clickbait at least or get good.

A vacuum fluorescent display display? Any listing of the code anywhere?

Ahhhh VFD's ! I loved those displays !

Hi, great work. Can you guide me on one issue? I have onkyo tx nr 616. Its display turns all all the segments fully the moment its switched on from power point plug yhat moment its on standby mode. Its totally unreadable since all the segments fully lights up. What could be wrong in that. I have replaced one shoryed transistor, prior to that display was dead, now it comes on but lights up fully meaning it shows unaddressed grids and anodes also. Pkease guide if you can.

So what was the secret project in the end ?

You can make it as VFD VU Meter.

This is fascinating content. Wish I kept up with this stuff like I did as a youth. Giving me inspiration! 🙏🏾

my company uses those for vending machines. I am pretty sure we are not paying as much as you mentioned for them...

Drop me a line so i can help you with your embedded code.

You can get a wide range of VFD display's from aliexpress.com. I've just ordered one like in this video and a very wacky stereo VU Meter!

3:25 "WR and CS, but I don't really know what those are." Really? LOL. Write (maybe write enable) and Chip Select?

13:41 The display is screaming to be put out of its misery.

Português legends please man :( I love you bro ,i love you job Xoxo from Brazil

no int i = 0 declaration

i'm not 100% sure on the date round 1964 to 68 the same principal display text on really old ctr or lcd and ever older is flip displays still stands to day apple still has it in there os to day far as i know but befair i'm a Linux fan.. yes i play game on there not that bad to be frank

The 3-pin connector is your friend, it's +5V/Serial/GND. If you ground the serial-pin it goes into demo mode and starts printing the ASCII-table one character at a time. If you want to use the serial interface with an Arduino; solder a bridge on J4 and connect TX on the Arduino to the serial-pin on the VFD and you're done. No fancy code required! I think the default baud rate is 19200.

and as always, im scotty from strange parts, thanks for watching

you could search for 40 sign customer displays - IBM/Toshiba, NCR, Wincor and a couple more companies still sell them - some are even USB. They get replaced with 8" or higher displays a lot now though.

some fruit machines years ago used vacuum fluorescent display like this..

That board your holding is worth about $500 US (if you can get one). Wow, with those prices someone should be manufacturing after market replacement vacuum flourescent displays.

enjoyed this so much more than the whole ATM Jackpot video. Would love to see more in-depth videos on your projects.

Believe my old kenwood headunit had this display

i is declared but never gets a value in c# the compiler would yell at you XD.

uhh... doesn't it just use the same standard as any other LCD?

I have been there with a random VFD I found in a lab. I didn‘t find a datasheet, so I tried to buzz out all the connections and routes, took me a complete sunday afternoon. But after that I stopped, because I also thought the board on the back is some custom thing I can‘t reverse engineer to show something on the display. So thanks for this interesting and encouraging video, my VFD looked surprisingly similar! If I find it again I might give it another shot.

As a software developer thats getting his feet wet in the area of electronics / embedded / system programming, this video really did give me new enthusiasm to keep on going. For example, I know bitwise operators in theory, but still can't wrap my head around their use on the PCB at library implementation level. Now I saw how it's done, hehe.

Great and curios vid. love the challenging ones (-:

It's not easy, being green.

11:14 - You cannot define a new variable inside a for loop and it is the stupidest shit ever.

Yesterday I’ve got the same module (only parallel) ... free of charge, sorry. This video makes my job to revive it much more easier. Thanks! PS.: to publish the code will be pretty :-)

I remember programmng one of these, the 4x20 model. It was a pain, but once I got it working it was set up to display my computer stats like cpu speed, fan rpm's, temps, unread emails, facebook new messages indicator, and using custom characters, it would switch into spectrum analyzer mode when you played music. A friend accidentally knocked it off my desk and it lost the vacuum. I was not happy.

Glad to see you again scotty ,thought maybe you gave up on us here on yt, I really enjoy your videos bro

I have an old VFD in my pc case displaying system info, i love the old look

What is that case?

He be making a strange parts machine

Have you tried the Liquid crystal library included in the Arduino IDE? If the display you have had 16 pins should work. It worked for me on an old 16x1 printer display

So it is some sort of loading bar it seems like. (The Project) But now the question remains.... what is it loading?.... a battery level maybe?

I Have a new IPAD 1st generation and I can’t used much cause every app requires IOS 12 This IPAD can’t be update passing IOS 5 There is something can be done? It will be great to find people can use their IPADs

That looks like an older fire alarm panel display

Never seen somebody so stoked to play with junk

Humm I have an old 4x20 version of that type. I need to dig it out. Could never get it to power on but maybe it's because I never tried the parallel mode.

You can still buy these new They are exepnsive though Also: I'm currently building a clock with soviet IV-6 VFD tubes and TTL only control circuit

Now this is freaking cool man! Looking forward to seeing it!

i can usually keep up with u when ur building things, but when u jumped into coding.. lol u lost me. it brought back horrible memories of my highschool computer science class

The pin layout look very similar to a standard 20x2 LCD. have you tried using the liquidCristal library?

As a professional developer myself, I noticed the lifecycle of a day in this video: Cool idea -> F.! why it is not working -> AHA! Me stupid! -> WOW IT WORKS MAAAAAAAN -> Let's do random stuff on it

Why do people thumbs down your just hating smh

For anyone interested in working with VFDs that wants *new* VFDs and not just whatever they can scrounge, they don't cost anywhere near $600 for most models. Basic character display models are $20-$50. Larger character models can push up to $100. There are also models running from $200-$400 with other features, like dot-matrix display and touch support. You can also get color filters to layer over the top. They're a really attractive option for simple monochrome displays. Most of the super-cheap character display models can use serial support and many emulate the HD44780 command set. More complex models may support I2C and/or SPI. Check out the Noritake shop at noritake-vfd.com. They have periodic promotions, and sell cables and power supplies. Purchasable models link to another noritake site (noritake-elec) with datasheets and code libraries (including arduino, AVR, MSP430, and STM32). If you've worked with microcontrollers, you should be able to get a simple message up in less than half an hour. I used a low-end Y-series model and I was able to display data with a USB-serial adapter from a PC. A simple program works, but they've also got a sample display application called GUD-10K that's useful for testing the product and confirming your connection. Graphical display and performance will require a lot more design effort. And bit-banging on a high-end computer is hardly the most efficient use of resources, so you'll want a microcontroller for most finished projects.

Can you make your own Iphone 3?! Greetings from Brazil

I think my old Betamax had one of them in it

I'd like to see you assemble Chinese-made mobile phones, any brand can, in Huaqiangbei.

I challenge you add replace iPhone display with curved display...can u do it?

I bought a bunch of these from radio rally's in the UK for a few pounds and built clocks etc. out of them. I even have one which runs full graphics which I've done scrolling images etc on using a Raspberry Pi. They really are lovely.

Who knew Edward Snowden was such a good fiction writer.

Am I the only one who was getting really nervous watching him wave that thing around?

How about modifying old samsung phones like the J7 ....Like an old car with beast underneath the hood

What happen to china?

i loved this video!, true perspective of how a programmer works and tries things up xD, keep it up, greetings from Colombia :D

Make an iPhone 11 without a notch

So, what's your take on Hong Kong? Yeah, I'm the turd in the punch bowl. Answer one way and that will show who you are. Answer another way the same thing. Don't answer and we can assume the worst.

dragged this out over a month, way too long, I got bored when you normally keep me intrigued. unsubscribing

Sir, Can you make any phone (android or ios) only with parts from damaged products or old phones ? Without any shopping

thank you so much for knowledge about electronics and all your experiences that you shared to us... its really cool and i very enjoyed watching all of your youtube videos

https://vetco.net/products/noritake-itron-vacuum-fluorescent-display-dm2015e-vfd these guys have a bunch...

When I was giving some training about Arduino to my colleagues I told them that, blink, was one of the most useful sketches of all; they just said it was a silly sketch and a silly prototyping platform xD

It's so cool that you got the display to print. Can't wait to see the secret project! 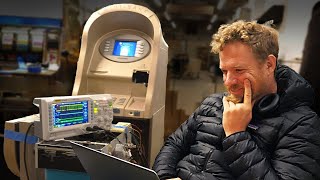 How We Built an ATM 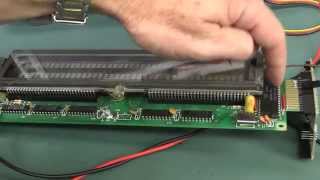 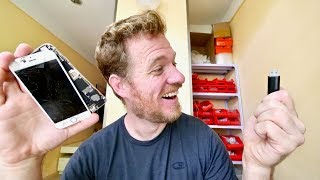 Turning a broken iPhone into a working USB flash drive? - in Shenzhen, China 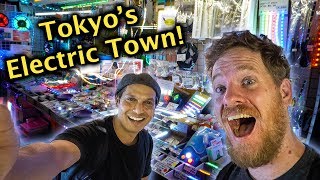 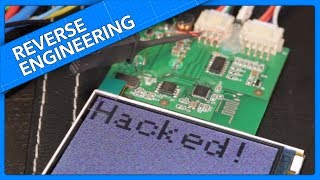 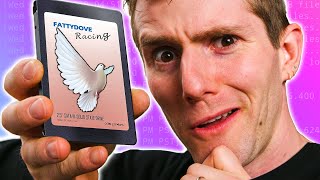 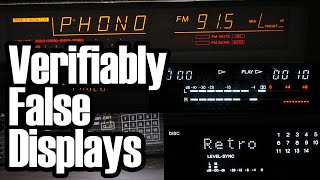 The VFD that isn't 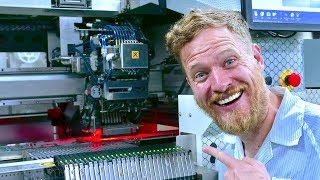 Inside a PCB Soldering Factory - in China 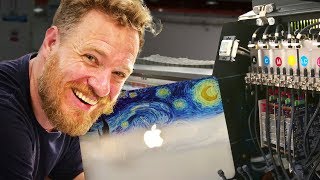 This printer prints on ANYTHING! 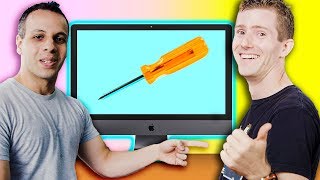 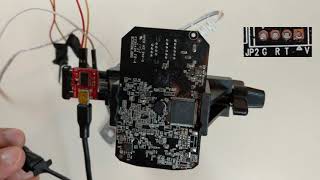 Intro to Hardware Reversing: Finding a UART and getting a shell