I had the rose colored spectacles with Ultima 4. That one was my first RPG really, and back then when, it was this huge world with so much options and so much stuff..... But when I revisited it recently, it just didn't live up to my memories. Games have come such a long way in the mean time.... :D

So much nostalgia from this, would love a full playthrough!

Colin (my brother) and I played on this game when it first came out on the Xbox; he was the only one to complete it. He also bought "Fable: The Lost Chapters" for PC, which was in our house until I gave it away recently.....Damn, that music in the Hero's Guild has also given me good nostalgia vibes. I'd love to play this anniversary edition ^o^! Is it available on Xbox One? Finally, I agree with you on wasps, Aoife. Really slimy pests, especially when they kill bees >=-( ! Otherwise, what a brilliant play through! Please feature Fable 2 for the next LTTP; my brother also played on it! =-D

Err just so you know ladies, unless you're one of those unlucky blokes who cant grow proper facial hair, you can get your moustache to do lots of weird things just by giving it a bit of a twirl so it dreads up on itself just a bit. That one's pretty big, but i've seen bigger in real life at competitions and wax is not required (although sometimes insisted upon anyway for reasons of shininess).

This was a lot of fun. Looking forward to more Zoe/Aoife adventures!

Please, please, I would love a Let's Play of this! Soooooooooooooo nice!

A fairly quick way to level up is to get to the hobbe cave, level up enflame, and kill the fuck out of the Hobbes and top off your magic reserves.

Been years since i played that ... man, i've gotten old ... I loved the first two games, never played 3. But i sure hope for a fourth installment.

I'd love to watch a playthrough of this

I really hope 4 is better than 3. I spent soo many hours playing fable 2, as a LGBT person I really loved the fact you could be male or female and you could marry either gender. Also not sure which quest it is but in one of the main story quests you escape out a tunnel under a massive house, part way through escaping you come across a chest, inside the chest is a potion that allows you to change your gender. I'm ftm so being able to switch your gender near the end of the story is amazing in my eyes. I didn't realize I was trans when I first played this, but going back to it I felt a deeper connection with my character due to this being an option.

7:51 At least you're slightly better with Northern accents than Rock, Paper, Shotgun

This was such a pleasant, fun, and relaxing video! Loved it, cheers! :)

A bo staff can absolutely kill people, and break bones. the leverage you can get on a 6 foot staff if wielded correctly is insane, even rattan sparring staffs can give nasty injuries if not well controlled, a full wood staff is a very nasty proposition to unarmoured opponents. also if you prefer avoiding being hit rather than blocking or parrying it is called voiding the attack or distance parrying.

great game on pc ... the only way to play games.

19:24 Oh my God, Zoe and Aoife were supplanted by holograms!

The Guildmaster is basically Dumbledor-ing his way through this isn't he? "Hello tiny child who's entire life has been turned upside down and probably has PTSD, go take this stick and attack whatever is in the forest right now! For LEARNING!"

Regarding the discussion about a school making people powerful, giving them all sorts of knowledge that can be used for good or evil and then just sending them loose into the world without thought about what ill they might cause. Hogwarts and Voldemort anyone? Okay, Dumbledore does try to defeat him and starts the Order of the Phoenix, but what about the headmaster who was there before Dumbledore?

Kinda hope you guys play more of this

Wasps eat spiders. As an Australian, that makes them bloody amazing.

Why did the wife in the beginning remind me of Harcourt Fenton Mudd's wife from Star Trek?

I still play this every now and then. But I much prefer Fable the lost chapters.

Oh boy this takes me back... Have a lot of emotional connection to this game.

Ahh crap, I recently threw out my Mac copy of Black & White. That was probably the rarest of the lot. I just noticed the guy who ran in warning of bandits left the bloody gate open. No wonder they managed to raze the village; it's all his fault! Absolutely with you on the timed quests thing. Nobody needs long delay timers or short mission timers.

You should REALLY watch last airbender it's GREAT!

My favorite game/series. I miss it dearly. I need to get around to playing the remake.

You're supposed to take his bribe, and then tell his wife like a true chaotic.

There was a guild war and the outcome was Weaver became the guildmaster and Maze the head of the guild and they made it so the heroes could chose to be good or evil instead of being forced to be good.

I take his bribe then tell his wife anyway.

This making me want to buy fable two

Wow I've recently recompleted Fable 1 and 3, what are the odds

The music in this game drops a ton of nostalgia on me. Great LTTP, thanks you two!

I dont think you can hit the back target without going 1st person because you need to lead the target slightly.

Fable. Still my favorite. I could go on for awhile about this game. 🤦‍♂️ here’s to hoping for a 4th 🍻 over a game of shove a penny. Cheers.

this was one of the funniest and great walkthroughts that i have seen, please upload part 2 or more fable games played by you two

The nostalgia is strong with this one, many days were spent when i was a young lad with my fat OG Xbox and Fable.

I loved Fable 3, but it was pretty broken on release. About 2/3rds of the way through it would crash for me. There was probably a patch to fix it but I never put my 360 online.

Benjamin's Brain In A Jar

Was this being played on Xbox One X? It looks absolutely lovely X Enhanced, even on my lowly 1080p TV.

Please do two and three as well the openings are great.

This video was the best, i have forgotten how amazing the first fable was

This brings back memories :) Might just have to get that anniversary edition. Interestingly enough, although Fable has a somewhat silly and light-hearted atmosphere, making evil choices always made me feel much more rotten than in more "serious" games. I think I've completed it thrice, but never as an evil character :D

Full playthrough please. I'd love to hear your thoughts on Jack of Blades and his new voice in the anniversary edition I personally preferred his original voice, it WAS high pitched but it was unnatural and innately eerie The anniversary voice does sound more demonic i'll give it that but it also sounds forced and out of place compared to every single other character. Anyways i know LttP never gets a second video but i'd love to see a lets play of this and see how you's react to the rest of it

@Blazeythe3rd _ It didnt need to be in the original at all, but i guess that could be cool. Like after taking scarlet robe and teresa he is more powerful so his voice darkens with each focus site

@Jamiroquai's Hatstand Each to their own my man.

@Jack Spiring the one in the Lost Chapters? Yeah I thought it suited his character a lot better. Demonic sounding.

@Jamiroquai's Hatstand You liked the new one better?

"You can't really kill someone with a bowstaff can you?" It takes approximately 9 pounds of pressure to the diaphagm to collapse it... then you die in seconds as your lungs follow suit 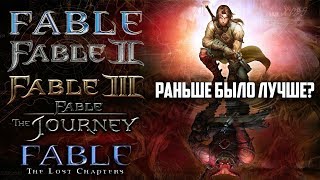 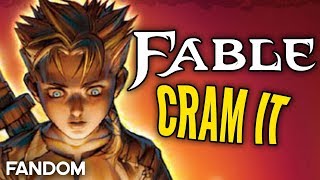 FABLE: The Story So Far 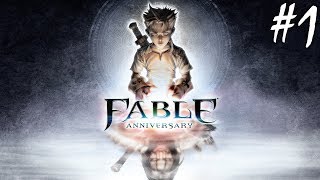 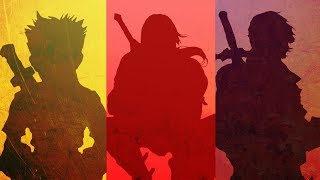 The Fall of Fable 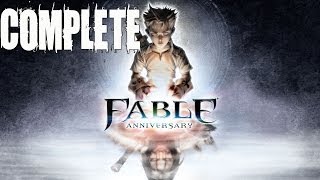 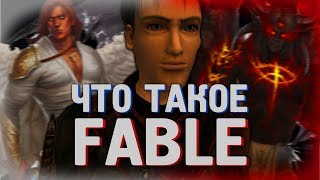 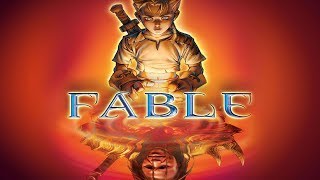 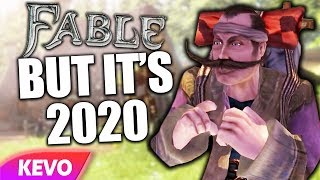 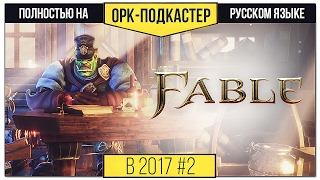 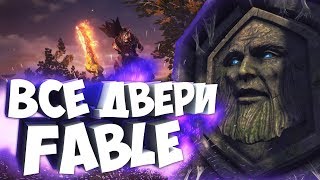 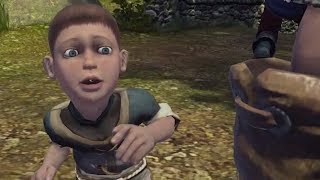 Fable is a game that lets you punch literally everyone 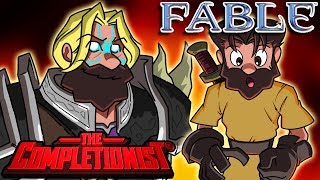 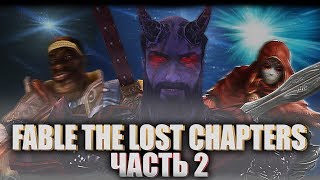 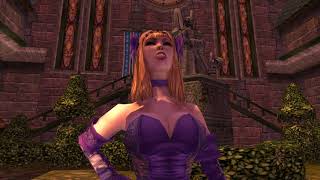 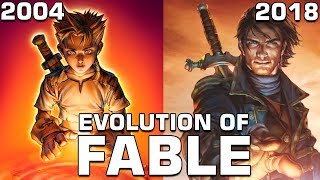 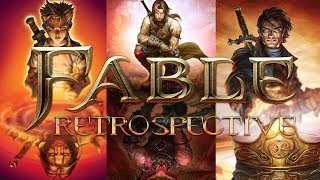 What HAPPENED to Fable? | Fable Retrospective 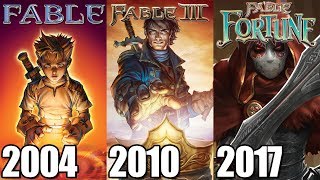